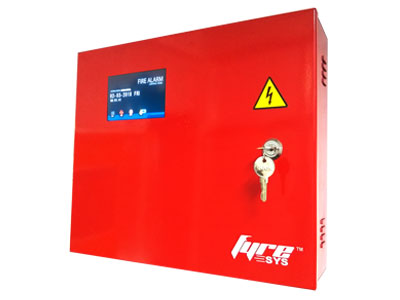 In addition the panel includes networking capabilities to monitor the status from any remote location or in your mobile phone, an internal buzzer and battery backup.

Addressable and Conventional are the two major classification of a Fire Alarm System. The key difference between the two is that you can pinpoint the exact location of the device that has been activated in addressable system.

Fire alarm control panel is the heart of the fire alarm system that serves as a central monitoring and control equipment. This panel monitors and triggers the notification devices in the event of emergency. Fire Alarm control panels are generally installed in an area of low fire risk and in a preferably accessing location

How does an Addressable fire alarm system work?

In an addressable system each and every device is tagged with a unique identification number which is further processed by the Fire Alarm Control Panel to track down the location of the device from the programmed database.

When fire is detected by a smoke sensor or when an alarm is raised manually by activating the manual call point, the activated device transmits necessary information to the fire alarm control panel along with its identification tag. The control panel further displays a detailed summary of the activated device along with its location and broadcasts signals to notification devices like hooters and siren to alert the occupants. This enables the user to take necessary action against the alarm.

Wired Fire Alarm System use cables to connect and communicate with the devices. In contrast, wireless fire alarm system utilizes radio waves for communication and minimizes expensive cabling. Even more, they are quicker and cheaper to install when compared to a wired addressable system